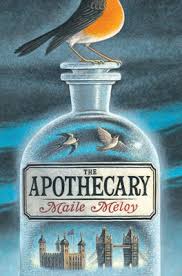 Potions and Soviets and spies…oh my!

When 14 year old Janie is forced to move to London after her parents are accused of being communist, she is, at first, too busy being homesick to realize what she is getting herself into. Her new school is hard, she misses California, and some of her new classmates think they are too cool to be seen anywhere near the new American girl.

It is 1952 and the Cold War is on the rise. Bomb drills are a part of everyday lunchtimes. Janie doesn’t think it could get any worse…

… until a boy named Benjamin Burrows and his mysterious father come into her life.

Mr. Burrows is an apothecary, which is kind of like a pharmacist only about 50 times cooler. How much cooler? Well, after Mr.Burrows is kidnapped by Russian spies, Janie and Benjamin are left to guard the apothecary’s book of elixir recipes. They are sent on an adventure that requires butt kicking, turning into birds, and creating a relationship that I fell in love with.

Honestly, I’m not normally one to pick up anything that takes place more than 20 years ago. This is a major exception! All the potions, cleverness of the characters, and mysteries grabbed hold of me and didn’t let go until the very end.

For anyone that has ever had to leave some one or some where they loved, Janie is a very relatable character. She starts off scared and confused by all the changes. However, she makes it through. Hidden under all the awesome, this book has a few good life lessons that are worth tuning into.

Overall, The Apothecary has something for everyone. History lovers and fantasy fans alike will be unable to put this one down!