All of the Above, Don't Want to be Crazy, Gaby Rodriguez, The Pregnancy Project, true stories 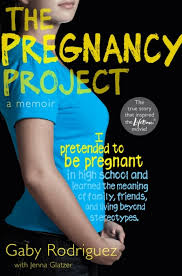 Before you read this book, you should know that it is 100% true.

Welcome to the world of 17 year-old Gaby Rodriguez. Important to say, her family’s history is not so great. Her mother’s first husband abandoned her seven kids after divorcing Gaby’s mother. (Gaby came along a few years later). All of her siblings had either gotten pregnant, or had gotten someone pregnant, when they were teenagers. As a little girl, Gaby had to help babysit all *gulp* 31 of her nieces and nephews.

The likelihood of Gaby not following in their footsteps seemed very low.

Despite all that was going against her, by her junior year of high school she was in the top 5% of her class with a 3.8 GPA.

At Gaby’s school, each 12th grader has to do a big project. It can be anything of their choice as long as they can get it approved. Most students do something along the lines of researching a career or learning a new skill.

Gaby had another idea.

From the beginning, she realized it was both a long shot and risky…

… but Gaby decided that she would pretend to be pregnant and make it a lesson on stereotyping.

After doing her research on pregnancy symptoms, talking to the people at Planned Parenthood to make it seem real, making sure it was approved (along with a fake project she submitted to the school board just in case), Gaby broke the news.

The only people that knew her pregnancy was fake? Her mom, her best friend, one sibling, and her boyfriend. Through them,Gaby was able to get an inside scoop on what people were saying about her.

Next thing you know, the entire country is listening.

Wow… wow. As I was reading this, I couldn’t believe it was true. Can you imagine how much courage it would take to do this?  That tiny bit alone is enough to make this story breath taking.

In life, it can be very hard not to judge someone by what others say and what their family does. Gaby taught me a lot about why this is one of the worst things you can do. Did you know that right now she is in college? The girl that everyone always thought would end up nowhere now the first one in her family to go. One word: Amazing. On top of that, there is a movie about what she did (it is on 4/14 on Lifetime!), a book (duh) and she even got flown out to New York to be on the Today Show.

I highly encourage everyone to read this. Gaby’s story will both amaze you and make you think twice before labeling someone because of something you heard.

Liked The Pregnancy Project? You might also enjoy…
All of the Above by Shelley Pearsall
Don’t Want to be Crazy by Samantha Schutz
P.S- Gaby shows a video during her presentation called “Children See, Children Do”. I found it very powerful. Here is a link

UPDATE: Finally got around to watching the movie… yes, it does cover the book better than some book-to-movies, but the movie does not cover everything! I encourage you to read the book as well if you are going to watch the movie!