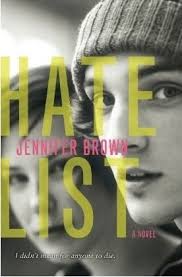 Valerie Leftman was there. Some said she was the cause. Some wouldn’t even look at her. Some treated her like she was a criminal.

Some said she was the reason her boyfriend fired on her classmates and turned their town upside-down.

It started with a list. Valerie and her boyfriend, Nick, were sick of how people were treating them. Sick of how they never got to be winners. Sick of being looked down on. So they wrote a list. They wrote down the names of the people who made their lives miserable…

… it was never supposed to go so bad.

That’s exactly it. This is NOT a story about a school shooting. It is so much more.

HATE LIST follows Valerie in the year after the shooting. It takes you inside her head to explore her struggle with coping and moving on after what happened. You follow her to therapy and hear what her classmates are saying about her.

Trust me when I say that some of it isn’t pretty. However, that is exactly what makes this story so moving. It goes beyond the sugarcoating and the so-called ‘uplifting recovery’ that you hear on the news after disaster areas start to rebuild themselves.

HATE LIST one of those books that will dig itself into you and not let go. It will force you to think about life, actions, and how, like it or not, everything you do has an effect on the world.

There is a reason this book has been winning so many awards, including most recently the Gateway Reader’s Award given by the Missouri Association of School Librarians. It is all the message without the lecture.

P.S.- In the author’s note, you learn that HATE LIST was inspired by a line in a Nickelback song. Here is a link to that song:   http://www.youtube.com/watch?v=-IUSZyjiYuY&ob=av3e