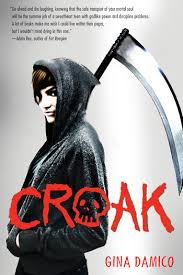 Meet Lex. Her hobbies include beating people up and sending her classmates to the hospital. Everyone but her twin sister is scared of her, and most people try to stay out of her way. Lex spent the last two years barely avoiding going to juvie. Her parents didn’t know what to do with her…

… until her Uncle Mort contacts them with a suggestion.

Lex soon finds herself on a bus, on her way to spend the summer with her uncle that she doesn’t even know. She was told that she would be spending her time helping out on Mort’s farm.

Uncle Mort lives in the middle-of-nowhere town of Croak, aka: a home for grim reapers. Mort sees Killing (yes, capitol “K”) power in Lex, and intends to teach her how to use it.

Don’t be fooled by the cover or the never ending topic of death- this book is anything but scary. A little creepy at times? Yes, but not scary. I was literally laughing out loud on this one. Lex has a smart-ass sense of humor with a dark twist that I wish more people had. Throw in the oddness of what the Juniors-  the younger people of Croak- do for fun, and you will be wishing you were a Croaker.

1 thought on “Croak by Gina Damico”