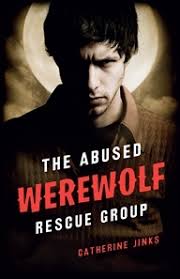 From the outside, 13-year-old Toby looked like your average kid. His hobbies included playing dumb pranks and learning the hard way that surfboards and roller skates do not mix. He was the perfect image of normal…

…until he woke up in a hospital after being found in a dingo pen with no memory of how he got there.

Shortly after the incident, Toby got a mysterious note telling him he might have a ‘rare condition’. After the note, a priest and an intimidating looking man show up at his house telling him he is a werewolf.

Toby more or less thought they were full of crap, and even got his friends involved to try and prove the priest and his friend had no idea what they were talking about.

Toby’s doubts didn’t last long. You tend to be more open to beliefs after you’ve been kidnapped.

After getting over how funny it is to say “naked in a dingo pen” in an Australian accent, I realized that The Abused Werewolf Rescue Group  provides moments of laughter, gagging, and being flat out confused while still managing to tie up all loose ends. There were moments I loved and moments I wasn’t a big fan of, but overall it was pretty good!

Lovers of paranormal fiction and mysteries alike will not be able to resist this one!

1 thought on “The Abused Werewolf Rescue Group by Catherine Jinks”