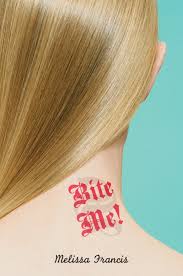 Not so old news: Her mom just married her now ex-boyfriend’s dad and her two best friends are suddenly going all Word War III on each other.

It took me a little while to sink my teeth into this one. The story opens by explaining the boyfriend gone stepbrother ordeal, which was a pretty good opening for a book that I won’t be calling a new favorite.

The best part of this book (and its sequel, Love Sucks) is the vampire and magic myths. Francis created a well thought out way of explaining vampires and a little something else that I can’t tell you without spoiling the story. AJ’s adventures are detailed enough to fully explain it while still giving the reader’s mind a little space to roam. I liked that.

AJ has a good dose of southern charm, but at times her voice seems a little extreme and a tat bit annoying. This gets better in Love Sucks.

Overall, Bite Me didn’t totally suck (pun intended). I thought the sequel was way better, but both provide romance, mystery, and a ton of slightly stereotypical vampire fun.

Liked Bite Me? You might also enjoy…
Immortal Beloved by Cate Tiernan