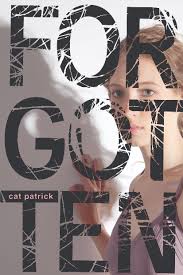 Ever since she was a young girl, London’s memory of the previous day was erased in her sleep. Not only that, but she could ‘remember’ the future. She managed to get through by leaving notes about the day, sometimes lying to herself and leaving out details to protect her own feelings.

Needless to say, this messes with the idea of a normal life for a teenager…

… especially when a new boy named Luke Henry enters her life. With him, London is headed for some shocking discoveries.

I remember finishing this and thinking WOW. For such a quick read- it only took me a few hours- it packs a lot. There are a ton of “didn’t see that coming!” moments, as well as scenes that make you sit there and smile like an idiot.

To anyone that has already read this book, go ahead and admit it: you have a book crush on Luke. Why wouldn’t you? He is an amazing character who’s a beautifully written part of the story!

The only thing I didn’t like is the fact that there will be no sequel. The big questions are answered, but the ending leaves a lot of room for the reader to think and wonder. According to Patrick, Forgotten is best left as a stand-alone.

Patrick has created a fast paced novel full of secrets, romance, and jaw-dropping moments. I loved it!