I don't want to be crazy, it's kind of a funny story, mental illnesses, ned vizzini, Perfect Escape, suicide hotline 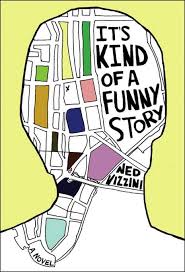 Craig thought that getting into one of the best high schools in New York would be the most amazing thing that ever happened to him. He would get a great education, end up with a nice job, and not be a failure.

He quickly started to doubt that. He realized his grades were only average. He got stressed. He couldn’t eat or sleep.

One night he decided to kill himself, but at the last minute called the Suicide Hotline and got himself checked into mental hospital to deal with his depression.

So, yeah, it’s kind of a funny story…

Kind of. For a book about depression and mental patents it’s hilarious. There were laugh-out-loud moments and characters that made me smile. For a book with the word ‘funny’ in the title? Not 100%, but then again it would lack the truth about depression if it was all butterflies and rainbows.

The beginning tells you about Craig’s path to becoming depressed, times with his pot-smoking friend, and what various psychiatrists had been telling him. This takes up about a third of the book, but it is necessary and doesn’t drag on as much as you would think.

This book is made even more realistic by the fact that Vizzini wrote this a week after spending five days in a psychiatric hospital.

It’s Kind of a Funny Story is a great book if you’re looking for some inspiration and a few laughs along the way.

Liked It’s Kind of a Funny Story? You might also enjoy…
Perfect Escape by Jennifer Brown
I Don’t want to be Crazy by Samantha Schutz

PS- If you or someone you know is considering suicide, please call the National Suicide Prevention Hotline: 1-800-273-8255 (US number). For international numbers and help, go to suicidehotlines.net