British teenager, Tom, gets superpowers after being hit in the head with an iPhone. He uses these powers to seek revenge on the gangs that hurt his friend.

Likes
*LOTS of action and fight scenes. Very exciting!
*Gets right to the point. None of those useless chapters that are clearly only there to take up space.
*The overall idea of this book is flat out clever. Couldn’t put it down!
*Random moments that made me laugh, like when Tom’s grandmother calmly told two policemen to f*ck off.

Dislikes
*Stuff that should have been talked about earlier and in more detail gets pushed further towards the back and seemed to be explained in a rush.
*Keeping track of all the bad guys’ names was a little tricky in a few places. However, this wasn’t that big of a problem.
*There were a few unanswered questions at the end. As far as I know, there will not be a sequel to fix that.

Notes
*Terms like ‘iBrain’ and ‘my iPowers’ make it seem a little cheesy at times, but is there really any other way to put it? Anyone? No? Exactly. 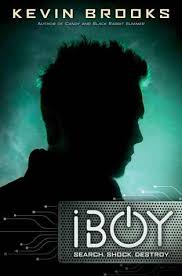