Rose is being blamed for the death of the Moroi queen, things are still weird between Dimitri and her, she knows a secret that could change the entire Moroi government…

Likes
*Dimitri… *looks off in a dream-like way and sighs happily*
*Dimitri
*Dimitri
*With my true love with Dimitri, I might be a little biased here…
*I became addicted to this entire series. It sucked me right in and created a very vivid world that I will never forget!

Dislikes
*The ending was just a tad rushed, as in the quick scene that changed everything was, well, quick.

Notes
*I’ve seen some reviews saying that it stopped a little short. I agreed, until I learned that there is a spin off series (called Bloodlines) that follows Sydney, Adrian, and Jill. 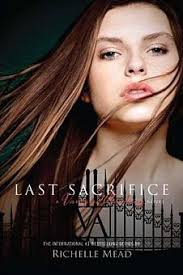