This is the first book in the Vampire Academy spin-off series, Bloodlines. Sydney the Alchemist has been assigned to keep the newly discovered princess, Jill, safe and in hiding in Palm Springs. Too bad several Moroi girls have been mysteriously dying nearby.

Likes
*Many of the story-lines from VA are continued. You hear about almost every main character from that series, get a visit from Rose, and even Mason *sniff* is mentioned.
*Sydney is such a different person than Rose, the POV of the Vampire Academy books. While Rose was often getting in trouble for acting before thinking, Sydney tends to over-think things and fears authority. It’s pretty cool to read that kind of voice in the same world.

Dislikes
*Parts of the ending were a teeny tiny idddy bitty rushed.
*The mental timeline I made of *insert new character here that I’m not going to spoil*’s evil-doing past was a little off.
*Much like the VA series, the title ties into the book but isn’t huge (like how in VA most of the scenes did not take place at the school).

Notes
*The book trailer… WTF? It captures nothing but the fact that Sydney is an Alchemist, and that detail is simply spoken. I’ve read that that’s Adrian in it, and 1) they didn’t meet like that, 2) even if they did, that was not their reaction at ALL, 3) who the bleep is creepy evil school guy? 4) I could go on but I have made my point. There is a link to the trailer at the bottom of this post.
*The next book in the series is called The Golden Lily. 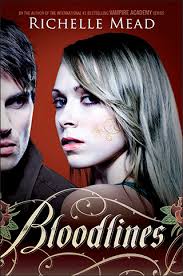