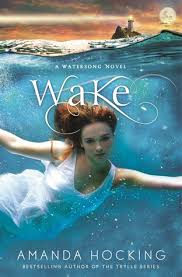 Life for Gemma and her sister, Harper, had been relatively normal. Harper worked at the library, Gemma spent every waking moment swimming, and every weekend they would visit their mother in her group home.

Around the same time that three mysterious girls show up in their quaint coastal town, people start going missing. Next thing she knew, Gemma found herself washed up on the beach with no memory of how she got there.

Normal quickly became the last thing on their minds.

The beginning did a pretty good job at introducing the characters and placing the setting. On the other hand, there were a few random details that looked like they were only there to take up space.

One of the things I liked best was how it wasn’t super obvious on what exactly was going on. Some books make everything so predictable that there is no point in reading the ending. I’m not saying that WAKE did the best job in the history of the world, but it was way better than many things I have read.

Don’t expect to have full closure at the end- it is the beginning of a series. The stopping place was chosen wonderfully though. You got fully introduced to the problem and know that there is even more action ahead. I look forward to seeing where Hocking takes Gemma next in the sequel titled LULLABY (coming in November).