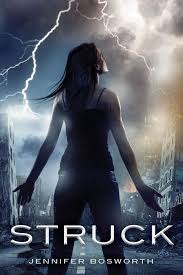 “My name is Mia Price, and I am a lightning addict.”

It is LA in what seems like the near future. Natural disasters have destroyed the country. The city is in crumbles because of a massive earthquake. Children go to school mainly for the food rations. A man with white hair and white eyes preaches about the world ending.

Before coming to Los Angeles, Mia had been struck by lightning so many times that she lost count. The feeling of a strike was an addiction. Red scars covered her arms and legs from all the hits.
Then she had an accident involving a little girl, a man, and burns that were caused by her own hands. Her family moved shortly after.

Fast forward to tattered LA where the story starts. Mia and her family have been getting by with running water some days and black market medicine for her nearly hysterical mother. It’s not living but they are alive. Then two separate people tell her about her important fate.

Lightning girl is about to get noticed.

The story starts after the quake that put one of America’s biggest cities in shreds and Mia’s mom in panic. If you are someone that reads over a long period of time this could make it a bit tricky for you. On the other hand, there are only a few times that Mia flat-out gives background details to the reader. I liked that because it made me think about the story a little more.

Mia is a good bad-ass character without being Katniss Everdeen/ Rose Hathaway over the top. Mia knows she has something she has to do but she tries to change her fate and learn more before jumping right in. However, she does have some hardcore qualities from the very beginning.

Some of the story seemed to drag a tiny bit near the middle but it is not noticeable if you don’t put it down for more than a day.

Overall, it looks like we have ourselves another girl saves a shredded world story…

… only this time, there’s a slight twist at the end that will make it all worth it.