Always a witch, Rachel Carter, review, So Close to You, the magnolia league 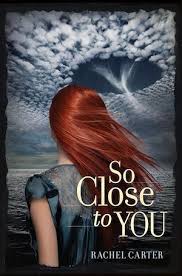 Lydia Bentley has been hearing stories about the mysterious Montauk Project all her life. The park in her hometown is a former military base and people still think there is stuff going on the the locked bunkers. The biggest believer? Her grandfather. He would constantly go out with her to search for clues, convinced that the Muntauk project is hiding the truth about his father disappearing during World War Two.

Lydia always thought he was a little crazy. Really, what could be out there?…

… until one day she goes out with him and finds herself in the year 1944.

So Close to You has many of the stereotypical things found in time-travel novels including Lydia meeting long dead relatives, having to learn the lingo of the time period and seeing her house before she was even born. These are not bad things and the story would be incomplete without them.

As expected with the start of a new series, you get left with a Jupiter-sized cliffhanger. Hint hint: it’s not what you would 100% expect it to be.

I honestly had a hard time finding something that I didn’t like about this book. It’s a big blob of science fiction with mystery and a pinch of romance dusted on top. The only thing I would change is I would give Lydia a slightly stronger voice. I would make her a bit more distinctive from other characters living in other stories.

The sequel, This Strange and Familiar Place, comes out in July.

Liked So Close to You? You might also enjoy…
The Magnolia League by Katie Crouch
Always a Witch by Carolyn MacCullough