All These Things I've Done, Because It is My Blood, Cinder, Gabrielle Zevin, review, The False Prince

WARNING: IF YOU HAVE NOT READ ALL THESE THINGS I’VE DONE, THIS REVIEW WILL SPOIL THE ENDING! 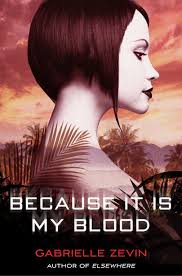 Because It Is My Blood picks up a few months after All These Things I’ve Done. Anya Balachine is about to be released from Liberty, yet her problems are far from over. The question of who will take over Balachine Chocolate remains, Anya needing to finish school, and keeping her family safe continue to be a burden. Mysterious attacks and blame being thrown everywhere only adds to the already wow-Zevin-likes-to-pick-on-characters situation.

I freaking adore Anya. She is such a strong, hard working character that gets thrown into this crap-load of problems that she manages WAY better than I -or anyone else I know- could. I also love how she talks directly to the readers. You don’t find much second person writing out there but Zevin does an amazing job. The little notes to the reader sprinkled in the book really add to the story and make Anya come to life.

You know those stories where there are big OMG moments that pretty much ruin the entire thing? Yeah, this isn’t one of them. Trust me when I say that this nearly the definition of shocker moments, but they are part of  the story instead of flat out taking up space.

This is where realistic and futuristic collide. Yes, it takes place 70 years from now but there are no televised fights to the death, love is still legal (even if chocolate isn’t and that is pretty much the same thing), and there isn’t a spaceship in sight. A+ for a future that seems possible.